There have been a lot of apologies in the news recently (mostly from men, but not all) and it has gotten me to think a little about what makes a good apology. To be clear, this isn’t a post about how to get out of jail by apologizing really, really well. This is about what does it actually mean to apologize to someone for something that you said or did?

Often times apologies, no matter how heartfelt they might sound, come across with an echoing thud when compared to the years of covering up and denial that preceded it. Hard to hear a “sorry” as being sincere when it basically comes down to being sorry for being caught. (Anyone remember Louis C.K.?)

Or maybe people apologize but in a “I’m doing this and it is responsible and better than what that other person did” kind of way. (Al Franken, maybe?)

The trouble with apologies is that they are often more about managing the image of the person apologizing than they are about owning the problem. There are also some problems that go way beyond an apology. “Hey, I’m sorry for having molested women over the past twenty years” is not what I would consider an adequate apology, no matter how sincere it might be. Here are two common reasons in my experience that we might apologize insincerely:

This is probably one of the first reasons why we jump to an apology and it usually comes with an excuse. “So sorry, I didn’t realize…” or “Sorry, but I couldn’t tell…” are some of the things that crop up in this kind of apology. If you have ever had someone apologize to you like this, then you know that it isn’t a real apology.

This reason for apology is more often about the person apologizing than it is about the person to whom they are speaking. “I just hate to think that I have hurt you in any way” is not really an apology so much as it is a plea for some kind of redemption. Nobody cares about you healing your feeling of guilt. They only care about the acknowledgement of their own experience.

Again, let’s assume that the thing you are apologizing for is not a crime against humanity, rather it is a stupid thing or insensitive thing that you may have said that offended people. I recommend that we all take a page out of  Chris Pratt’s book of apologies. Last year he was interviewed in Marie Claire and shared the opinion that blue-collar America was underrepresented in Hollywood movies. This came across as completely tone deaf given the criticisms of Hollywood’s treatment of women and black characters throughout their history. As soon as the article came out, Chris had this response: 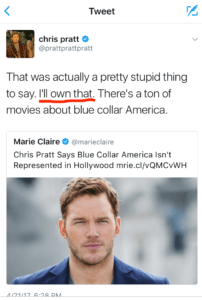 What I love about this apology is how effortlessly and clearly he owns it. He didn’t equivocate, over-apologize or try to side step it. If people want to judge him for saying something stupid, then he is right there with them. “Yes, I’m an idiot.”  As long as you don’t make being an idiot or saying insensitive things a common practice, and you have some credibility with your audience, then this is a great tactic. There is no excuse for being an insensitive jerk, but there is something surprisingly disarming about being vulnerable enough to admit you were an insensitive jerk.

What can you do?

1. Understand what you said/did and accept it.

2. Own what was wrong about it without equivocation.

3. Don’t ask for anything from the other party. (No forgiveness or even understanding.)

It doesn’t make the thing you did okay, nor does it mean that anyone will actually forgive you. What it does allow is for the other person to think of you in context of how they already know you, rather than just in the context of your behavior.

Chris Pratt was able to benefit from his years of overall authenticity and good naturedness, that people seemed to get over it pretty quickly.

Even if that isn’t the case, the act of understanding the impact of your actions, owning it as not being what you wanted and not needing to be forgiven is vulnerable enough that most people will be disarmed. It isn’t easy to do, but people will appreciate you for doing it.

*note: it is important to recognize that if you really hurt someone, don’t expect them to forgive you. That is their business and you will have to live with that. A good apology isn’t about “making it right” with the other person. It is about owning what you did and being accountable for it. Let the other person have his/her feelings about it and to come around in his/her own time.

Blog Post16#blog
Get A New Story