Home » Blog » “Doing Your Best” Doesn’t Bring Out Your Best

I have written a few times about the workshop I did with Keith Johnstone so you may recall me mentioning his work in improvisation and performance before. This post is another reference to a request that he made that continues to rumble through my mind. He said to us on the first day, “I ask you not to do your best. It just doesn’t work.”

(Me trying to understand this concept)

This idea that doing your best leads to poor performance created a lot of dissonance in my brain. It went against everything that I have believed about performance, self-motivation and excellence, and yet I could also see the truth behind it. Doing your best often leads to all kinds of problems.

(For those interested, here is his TEDx talk on this subject)

What kind of problems?

Trying to do our best is a way to put more pressure on ourselves to perform at a higher level and achieve a better outcome. It seems to make logical sense that the bigger our goals, the more pressure we should put on ourselves. If I want to do well on the exam, all I need to do is to work hard and do my best, which sounds easy and actionable until we think about what “doing my best” really means. Often it simply means exerting more effort, which can be counter-productive in moments when we need to be relaxed in order to be our best selves.

Keith points out that “doing our best” is more of a performance than it is an action-item. We want to show the world (and ourselves) that we are trying hard, so we tighten our muscles, scrunch up our faces and act like someone who is working hard at something.

(I will remember the quadratic formula!!)

What I could never quite understand when I was a kid was that the harder I concentrated during a test, the worse I did. I was a notoriously bad test-taker in high school and college, and I would often overthink, second-guess and doubt myself into a mediocre grade, regardless of how much I studied. I was a good student overall, but tests caused me a lot of anxiety. It was always my intention to do my best, but I never experienced a positive correlation between that intention and the outcome.

The same was true for me as an actor as well. When I went into an audition or a scene with the intention of doing my best, I often left feeling like I did the opposite. Doing my best always felt disconnected from the process, but it made so much logical sense that I never really questioned it.

I suppose the problem lies in that disconnection from the process itself. Doing my best on an exam or an audition is not actionable. In fact, the idea of “my best” is pretty vague. What does that even look like? When I have let go of the expectation that I have to do my best, and focus instead on the process of what I am doing, I am much more successful and am capable of doing some of my best work.

When I get up on stage with the expectation that the audience will think that I am funny or talented, I lose my connection to the process of the work. I become disconnected and as a result, mediocre.

Don’t just take my word for it. I am currently reading a book about performance and excellence in baseball by H.A. Dorfman and Karl Kuehl called The Mental Game of Baseball: A Guide to Peak Performance. 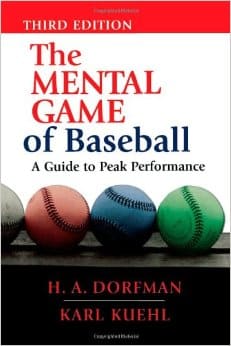 For those who don’t know, Dorfman and Kuehl have been mental performance gurus for baseball players since the early 80s. They are sports psychologists who break down the mental process to achieving peak performance. While the book is focused on baseball and gives a lot of anecdotal information that would not be interesting to the casual fan, I recommend it as a tool for understanding how top performers are able to get over their own mental hurdles.

This is a quote from the second chapter: “A person who is encouraged to ‘just do your best’ usually doesn’t. He doesn’t clarify what his best might be; he doesn’t extend himself to find out. Setting personal goals is essential for gaining control of potential, of success–of self.”

While wanting to do “your best” may seem like a productive thought, it actually takes you out of your process and focuses you too much on a future you instead of meeting yourself where you are.

The Externalization of the Self

Okay, what happens when you project onto the future some ideal performance? Well, for starters you get to feel like you are in control of the outcome. If you do your best, then why wouldn’t you get hired? Why wouldn’t the audience love you? Why wouldn’t you be successful? Makes sense, except that it detaches you from your own process.

Think about a time when you have been most successful and most creative. Most likely you have experienced something akin to what Mihaly Csikszentmihalyi (psychological researcher) means when he talks about “flow.”

Flow state is an engaging process where we forget ourselves and how we are being perceived. We lose the feeling of self-consciousness and instead become intensely aware of our intuition. Artists and athletes talk about this state all the time (often referring to it as “the zone”), but many of us have had the experience of this in work or life at some point when we have given ourselves over to the process.

When you create an external version of yourself (what I consider to be your “future successful self”) you create the illusion of an actual target. The advantage to thinking this way is that you get to feel like you are in control of the outcome, the disadvantage is that you lose control over the tools that allow you to be successful.

Actors who try too hard often turn off an audience by being too filled with tension and worry. The same is true for people who are trying to hard to be liked or to be respected. Often they get the opposite response than what they wanted.

That last one may be the hardest, but it is worth leaning into it and putting it into practice. The more that you are able to stay inside yourself, focus on the steps needed to accomplish the task, and believe that you belong, the easier it will be to let go of what other people think.

In the end, the goal here is to be our best selves, which is fundamentally different than trying to do your best. Being takes no stress or tension and requires us only to present who we are. Trying to do our best forces us to imagine a different, more perfect self.

When you are present and connected you have a chance to shine your light on world and do great things. When you are straining to be something more than what you are, you profoundly limit yourself. Let go of the expectation that there is a perfect external self and trust the process.