A few years ago I gave a presentation to the freshmen class of young artists at the Maine College of Art. The purpose of the workshop was to teach them how to talk about their work in a clear, concise and meaningful way so that anyone (not just other artists) could appreciate their vision. While it was a lot of fun and they did a great job, I ended up learning a valuable lesson about criticism and artists that has been in my mind ever since.

I knew that first year students had to go through a heavy critiquing period and that often their work was critically eviscerated in front of their peers and sometimes even by their peers. I asked them how they were able to take that kind of criticism in without feeling as though it were personal. What surprised me about their response was how surprised they seemed by my question.

There was a loud response that they would never take that criticism personally. When I pushed back a little (because I didn’t really believe them) and asked why they didn’t take it personally one student yelled out “How else would we get better?”

And that about sums it up. Artists are willing to take brutally honest critiques of their work from their teachers and their peers because they want to get better.

What would it be like if we all took criticism and feedback with the same intention? How would we react differently?

I argue that for one people would feel less fragile when they present their work. I can remember as a young actor feeling like every moment on stage was a test of whether I had any talent. I tried to make every line count so that the only feedback I ever got was positive. How do you think that worked out for me? Can you just imagine how loose and confident I was as an actor then?

When our mission is to get it “right” so that we can be affirmed or validated, then our behavior tends to be forced and unnatural.

When we change our focus from trying to prove that we have a right to belong, then we can focus our energies on getting better at what we do. The criticism becomes less personal, less about who you are and more about your work.

Besides, nobody has the right to tell you whether you are worthy enough.

There are a few rules that artists seem to use in order to keep themselves from getting derailed by criticism, and I think that we could all use them in our own work.

1. Only accept criticism from other artists

Art criticism from a non-artist must be as sophisticated as getting dinner suggestions from your five-year-old. You have to appreciate the critic’s taste and their talent if you are truly going to grow from their comments. I tell my clients to ignore public speaking tips from people who aren’t public speakers. Just because you watch TED talks, doesn’t make anyone an expert.

Asking for a critique is not the same as asking for validation. As an acting teacher once told me, “if you have to ask if you have what it takes, you don’t.” (Which was her way of saying that the question wasn’t one that she could answer, so, you know, shut up and pay attention.)

3. Take only what is useful and leave the rest

Just because someone told you things she didn’t like about your work doesn’t mean that you have to accept them all as gospel. When we get feedback at work about our public speaking and our performance, we have to measure it against what we experience as a whole. I like to ask myself if this criticism matches what I have heard before and if it aligns with who I want to be. If it doesn’t, then I leave it alone.

When we compare our work to others, we disconnect from our authenticity. There is nothing less useful from a creative perspective than getting feedback that tells us we need to be more like someone else. There are already too many people who are exactly alike. We need to be ourselves. Only feedback that helps us to discover ourselves in our work is worth listening to and following.

Finally, I like to look to Ida Tarbell for inspiration on this. 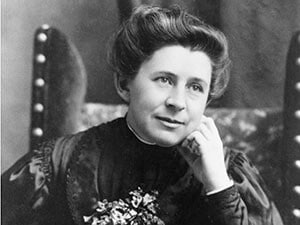 Ida was one of the most influential journalists who wrote during the early 20th century. She worked with Sam McClure and McClure’s magazine. She wrote important, deeply researched pieces that revealed the pervasive and negative effect of Trusts and monopolies in the early 1900s and these pieces had a powerful effect on public opinion. McClure was famous for giving her brutal criticism and forcing her to cut and refine her pieces, often in ways that other writers sometimes found to be distasteful or personal. Ida, however, just wanted her writing to be better and she took all that criticism in stride, working to refine the work and thereby creating powerfully researched and well-written articles.

We could all learn something from Ida and the other artists whose goals are simply to improve their craft and produce the best work possible.

You already have permission

It’s about your work, not yourself

Take what you need and leave the rest

video28#blog
How Can You Have More Presence?