Have you ever had to take direction from someone who looks like he/she is not entirely sure who is in charge?

We had a teacher in high school who taught speech class, and he was notorious for being unable to handle a classroom of teenagers. Every time he turned his back the entire room would bombard him with paper airplanes.

(The poor guy never had a chance.)

Schools talk about certain teachers having “command” of their classrooms and in the business world we usually refer to it as “presence,” although command is good as well.

Rather than just talk about what helps people have more presence or command, I wanted to point out what makes people lose their authority even if they aren’t facing a room full of rowdy teenagers.

If you are trying to command a room, but your face looks like this: 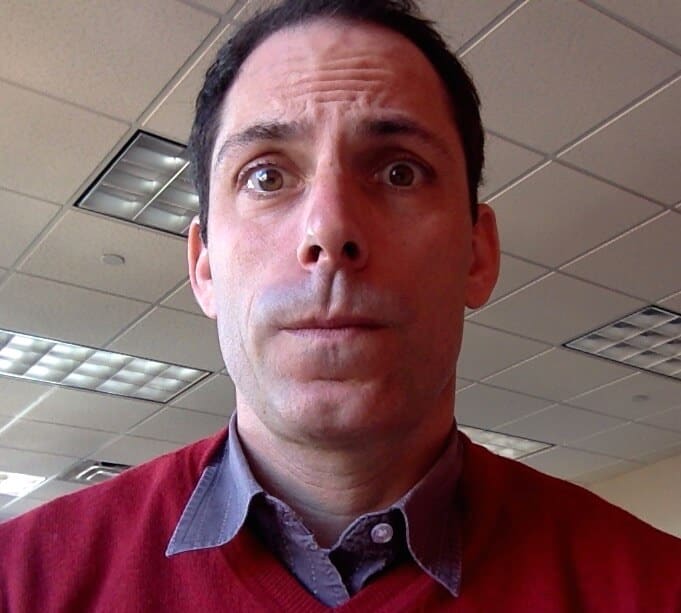 You are signalling to the group that you are scared. More importantly, the combination of furrowed brow, pursed lips and worried eyebrows will create an uncomfortable dissonance as you try to claim authority in a room. (No I don’t have the research to back it up, unless you count fifteen years of trying to get teenagers to sit in a circle and stop talking.) My experience is that when we create this dissonance, the audience gets a revulsion toward the speaker. They might actually start hating him/her. I imagine that it has something to do with the cognitive dissonance of being told what to do by someone who seems so unsure of him/herself.

When we are nervous or excited our voice tends to go up a few octaves. More often than not, however, an audience will read that high voice as anxiety and not excitement, which will make them anxious (see Daniel Goleman and his Open Loop theory about emotions) and they will begin to reject you. This is why people who have a lot of authority tend to speak in calm, steady and low tones.

(Some even make careers out of it.)

Just by bringing your voice down an octave and taking the shrill out of it, you will help make your presence more commanding and authoritative.

There is a subtle difference between asking a group of people if they “get it” or if they are “with you” and needing to know if they are on your side.

Subtle in the same way that there is a subtle difference between the grand canyon and a culvert.

The best coaches, teachers, directors and leaders I have ever known have all had one thing in common that my friend John Brubaker calls “refined indifference.”

Many years ago I had the privilege to work at the same institution as legendary coach Ted Garber. At the time he was a pretty goofy guy, but when he got on the sidelines with his team he was absolute presence.

His teams routinely competed at a high level and his players were respectful, well-organized and successful. And he almost never yelled from the sidelines or raised his voice in anger at an athlete. He was serious without being wrought and loose without being undisciplined. Most importantly, he never communicated a need for the approval of his players. I learned a lot just watching him coach (although I could never translate it to my coaching…) No matter how unsettled he was inside or how much criticism he got from others, he always presented himself as calm and that presence rubbed off on his players.

Although the outward manifestations of these three elements may be more subtle than I’m describing them, when you feel yourself losing your authority or losing a crowd run through the check list:

1. Is my face relaxed and calm?

2. Is my voice at a low octave and calm?

3. Am I clear that I can’t ask for validation from this audience?

Getting control of these three elements will help you immensely at increasing your presence and maintaining an air or authority.

Blog Post12#blog
You Have A Choice