Whenever I enter into a situation where there is confusion and conflict within a team, I look for the gap between the intentions and the impacts of what people say.

What does that mean?

Most people who are working on a project have to work collaboratively with a team of people, and they often have to coordinate and communicate with others outside their team.

In almost every situation, there are two assumptions that we live by when we encounter friction or resistance.

What does it mean to resist someone or something?

How will I know when I see it?

Let’s break these down into three categories for the sake of this conversation.

We could probably come up with more, but I think that these cover the most obvious ones.

Most of us either know someone who is currently passively resisting something, or we are the one doing it. This is pretty common.

The third one is hard to spot, and it causes the most confusion.

Let’s take a look at it.

What are you feeling?

When you’re trying to collaborate with a group and coordinate everyone around a shared goal, pay attention to what you’re feeling.

Your emotions are an important signal to you about what’s happening with the team.

They will also help or hinder where that conversation goes.

Let’s say you present a solution to a problem that you think is well-defined and “Tony” (just to give him a name) speaks up, offering more context and details that only add confusion to the conversation.

Notice your emotions. What do you feel?

You might notice a tightening in your chest, your belly, or your throat.

Pay attention to the emotion under it because it will be a key into what’s going on.

Maybe you feel thwarted by Tony’s question? Perhaps you don’t like the way he seems to saying it?

If you can tell that you’re frustrated by what Tony is saying or the way that he’s saying it, rather than blaming him for making you feel this, try being curious.

And, if you could accept that possibility, what might Tony be frustrated by?

If you didn’t blame him or yourself, you have a chance to discover something that’s happening between you.

The interplay of communication.

What if we didn’t see communication as a transaction of ideas and requests?

What if it were more often a game of status and relationship?

Together, who are we?

When we can notice the resistance happening between us, and when we’re willing to get curious about it, we have a chance to change the dynamic.

(For those who like the “rabbit hole” of information, Gestalt psychology talks a lot about resistance as a tool for introspection and therapeutic work.)

In other words, people resist other people for all kinds of reasons, and not all of them are logical.

They might be someone who resists change in general, or they might have a specific reason why they resist this change.

Sometimes they see things that you don’t see, but they have a hard time explaining it.

There are even times that they don’t know why they are resisting something. It can be invisible to them.

Whatever the rationale, you can’t address it if you don’t name it.

What if we just named how were experience someone?

We can’t get at the gap between what someone means and the impact it has on us without naming the impact.

“Tony, I’d like to pause here and talk about what’s going on. When you add this level of extra detail, I get confused and then frustrated. It feels to me like you’re stalling. Is that your intention?”

In this case, Tony is not my superior, rather he is either a direct report or a peer, so this question isn’t as scary as it sounds.

Just by naming what I’m experiencing and checking in with him gives him a chance to be curious about what he’s experiencing.

Note: this kind of interchange takes practice and requires some cultural norms to be built up with the team. It’s not complicated, but it does take persistence and intentionality.

The opportunity here is to talk about what’s going on (the feelings, the facts, and the story behind them) without blaming anyone for making us feel a certain way.

If we can stay out of blame, then we have a chance to improve the quality of the communication.

When we begin to be curious about how we interact, and the resistance we experience, then we have a chance to get real with each other.

The more trust we have within a team, the more freedom we have to be ourselves and to achieve a shared goal.

That only happens when we focus on the quality of the connection and the impact that we have on each other.

The key to improving that trust and to create more innovation and freedom within a team is to pay attention to the resistance you feel.

It’s not an obstacle to be crushed or a danger to be avoided. It’s information.

When you get curious about it, you have a path to becoming a more collaborative and confident team. 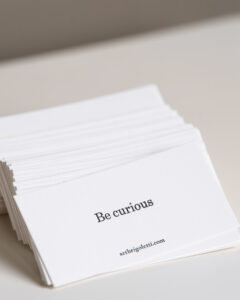